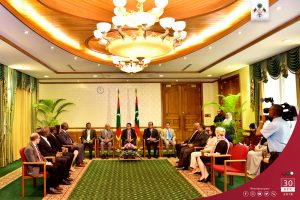 At a courtesy call held at the President’s Office this morning, President Abdulla Yameen Abdul Gayoom has briefed the visiting delegation of the United Nations Permanent Representatives from various countries, on the current political situation, the Maldives’ development story, and the Administration’s policies for attaining sustainable development.

During the call, the President welcomed the delegation to the Maldives and emphasized the sustainable practices adopted by the Administration in planning and implementing its development agenda. In this regard, discussions were held in the areas of fisheries, tourism, energy and matters of mutual interest in international fora.

Continuing on, President Yameen noted that the Administration has doubled the value of per capita income over the last four years, noting the positive economic outlook of the country. He reiterated his commitment to comply with the people’s wishes and aspirations, and underscored that the Maldives has graduated from the category of Least Developed Countries, in 2011, to Middle Income Country status, having achieved 5 of the 8 Millennium Development Goals.

During this meeting, President Yameen shared with the Permanent Representatives the many factors including climate change, geography and culture shock that present continuous challenges to the progress and development of the Maldives.

The President also briefed the Permanent Representatives on the current political situation in the Maldives. He emphasized that despite the recent State of Emergency declared in the country due to unprecedented events, there was no enforcement of a curfew and that general movements, services and businesses were not affected.

The President further emphasized that despite size, geographical location or extent of development, all countries must share a common understanding to be mindful of differences unique to each country and exercise mutual respect towards each other.

Speaking at the meeting, the delegation of Permanent Representatives commended the remarkable strides the Maldives have achieved towards attaining sustainable development and in creating a resilient economy. The delegation also agreed with the President that as a Small Island Developing State, the Maldives faces a myriad of challenges. They pledged their support to the Maldives in both bilateral and multilateral issues of common concern.

President Yameen was accompanied at the meeting by the Minister of Foreign Affairs, H.E. Dr. Mohamed Asim, Minister of State for Foreign Relations at the President’s Office, H.E. Mohamed Naseer, the Foreign Secretary H.E. Ahmed Sareer, and the Permanent Representative of the Republic of Maldives to the United Nations, H.E. Dr. Ali Naseer Mohamed.