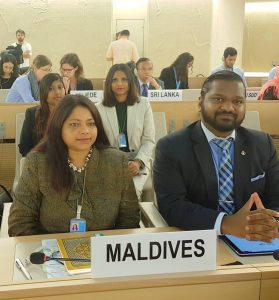 The 39th Session of the United Nations Human Rights Council commenced today in Geneva, with the Maldives set to engage with the Council and actively participate in its deliberations. During the 39th Session, the Maldives is due to deliver statements on a number of key areas in the work of the Council. This will include statements for High-level Panel discussion on the Convention and Prevention of Genocide, Statements for Interactive Dialogues on Rights of Older persons and Water and Right to Development.

The Maldives, as part of regional and political groups, including the OIC and the Non-Aligned Movement, have shared concerns of the human rights atrocities that are escalating around the world. In this regard, the Maldives will deliver a statement on the discussion on the issue of Human Rights situation in Myanmar, Commission of Inquiry on Syrian Arab Republic, and the Agenda Item on Palestine.
The Maldives will also co-sponsor a side event with the Permanent Mission of Bangladesh and other OIC countries on systematic human rights violations against minority Rohingya Muslims in Myanmar, and a way forward to address the situation. Ambassador Hala Hameed will be amongst the distinguished panellists at the side event, along with Special Rapporteur on Myanmar Ms Yanghee Lee.
The Maldives priorities at the UN Human Rights Council include women’s rights, rights of the child, climate change and environment, and, rule of law and democracy. In this regard, The Maldives will assiduously contribute and co-sponsor several key resolutions that are a priority to the country.

The Maldives have served as a Member of the Council as for two conservative terms of six years until 2016. Maldives is currently an observer member of the council. The Human Rights Council is an inter-governmental body within the United Nations system, made up of 47 Member States, which are responsible for strengthening the promotion and protection of human rights around the globe. The new United Nations High Commissioner for Human Rights H. E. Michelle Bachelet, who assumed her post on 1 September 2018, also presented an oral on the situation of human rights around the world. The 39th Human Rights Council Session will continue for 3 weeks, concluding on 28 September 2018.