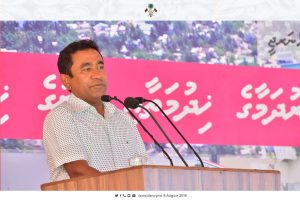 President Abdulla Yameen Abdul Gayoom has stated that the aspirations of Maldivians, towards the current Administration, have been fulfilled. The President made this remark while speaking at the function held this afternoon to initiate the sewerage services system and inaugurate clean water services in Kolamaafushi Island, North Huvadhu Atoll.

During the Speech the President said his Administration has made numerous efforts to fulfil the aspirations of Maldivian youth and senior citizens. Highlighting that these efforts and achievements will further enhance the needs of the community for more progress; President Yameen said that now is the time to work towards achieving this progress.

The President also noted that the Nation no longer believed the lack of resources to be a barrier to development, highlighting that people want to resolve the challenges and difficulties they face and that the community is confident of the Administration’s capacity to deliver.
While addressing today’s gathering in Kolamaafushi Island, President Yameen also highlighted that the Administration has spent MVR 227 million so far for the development of Kolamaafushi Island.

President Yameen is scheduled to take part in the ceremony to mark the completion of the road development project and inaugurate the housing project in Villingili Island.

The President will also inaugurate the Fishermen’s Marina in Kooddoo Island.