22 August 2015, New Delhi – Ambassador of Maldives, His Excellency Ahmed Mohamed hosted a Reception to commemorate the Golden Jubilee Anniversary of the Independence of the Republic of Maldives and the Golden Jubilee Anniversary of the establishment of the Diplomatic Relations between the Maldives and India. The occasion was graced by the Minister of State for External Affairs, His Excellency Gen. Retd. V. K. Singh, as the Chief Guest of the event.

Speaking at the reception, Ambassador H.E. Mr. Ahmed Mohamed highlighted on the remarkable growth and advancements Maldives has achieved during the last 50 years and stated that it showcased truly glorious achievements, economically, socially and politically. Furthermore, the Ambassador also noted that under the Presidency of His Excellency Abdulla Yameen Abdul Gayoom, the Maldives is geared towards further progress, stability and prosperity.

In addition, speaking about the relationship between the Maldives and India, the Ambassador highlighted that the two countries have always enjoyed cordial and multi-dimensional relations and that this relationship has always withstood the test of times.

The reception was attended by Ambassadors / Ambassadors accredited to the Maldives, senior officials from the Government of India, business community, opinion makers, media and Maldivians residing in New Delhi. The music from the Kinetic Operations (KOPS) from the Maldives National Defence Force (MNDF) brought an additional jubilant ambience to the event as they presented traditional and cultural melody to assuage the audience. 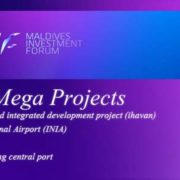 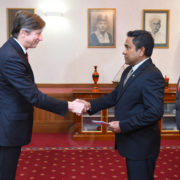 Speech by His Excellency President Abdulla Yameen Abdul Gayoom at the meeting...
Scroll to top