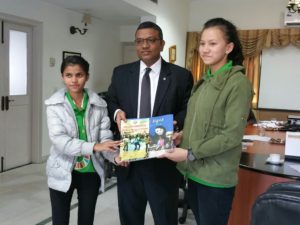 Ambassador H.E. Ahmed Mohamed met with the children representatives from all across India preparing for the United Nations Human Rights Council’s 27th Session of the Universal Period Review scheduled for May 2017.

The participants presented the outcome from consultations with their peers and also recommendations that they have included the UPR Report. Ambassador H.E. Ahme

d Mohamed applauded their efforts to address the needs of the children, of not only India but across the world, who as one participant stated are also ‘present citizens of the world, and not only future citizens’.At the end of the meeting, the participants presented the Ambassador with a copy of their UPR report.

The children are working in partnership with the NINEISMINE campaign. The NINEISMINE is an advocacy initiative for and by the children of India that sought the fulfilment of the Millennium Development Goals (MDGs) and the goals in the Convention on the Rights of the Child (CRC). It has been actively engaged in the post 2015 process of framing the new Sustainable Development Goals (SDGs) and is now working actively towards their promotion and fulfilment.

The Government of Maldives does not agree with the Opinion of the UN WGAD on...

Fifty-Third Session of the SAARC Programming Committee commences in Kathman...
Scroll to top