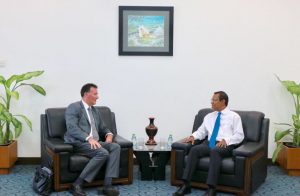 The two dignitaries discussed the bilateral relations between the two countries and ways to further strengthen the existing relationship. Foreign Secretary Ahmed Sareer expressed his gratitude for the continuous support extended by the Australian government for the human resource development in the Maldives.

They also exchanged views on specific areas of cooperation between the two countries, in particular, environment and international relations.

In the meeting, Foreign Secretary Sareer was accompanied by Mr. Mohamed Shujau, Desk Officer at the Ministry of Foreign Affairs.