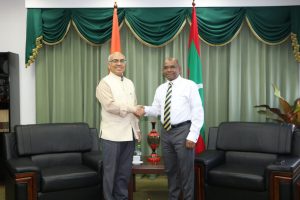 In the meeting, Ambassador Mishra thanked the Government and people of the Maldives, for the warm hospitality extended to Prime Minister Modi, during his visit to the Maldives to attend the inauguration ceremony of His Excellency President Ibrahim Mohamed Solih.

At the meeting, Minister Shahid and Ambassador Mishra discussed the implementation and progress of ongoing projects between the two countries, as well as future cooperation in areas of mutual importance. The Minister and Ambassador also discussed preparations and important matters for discussion during Minister’s upcoming visit to Delhi on 26 November 2018.

A Ministerial delegation is scheduled to visit Delhi, India from 26-28 November 2018.

Ambassador Mishra was accompanied by Ms Archana Nair, First Secretary (Pol.) at the Embassy of India in the Maldives.