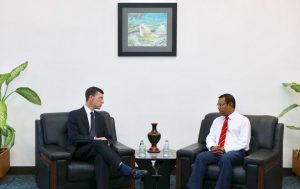 HE, Mr. James Duaris, the Ambassador of the United Kingdom to the Maldives met Foreign Secretary Ahmed Sareer today.

The dignitaries discussed bilateral issues of mutual interest and ways to further strengthen cooperation and ways to tackle issues such as climate change, counter-terrorism, and radicalization.They also exchanged views on ongoing economic and political developments in the country.

In the meeting, Mr. Dauris assured Foreign Secretary Sareer of his commitment to proactively engage with the Government and work towards strengthening ties between the two countries. He also expressed the need for both countries to closely coordinate on key international developments.

Foreign Secretary was accompanied by Joint Secretary, Ms. Fathimath Najwa at the Ministry of Foreign Affairs.