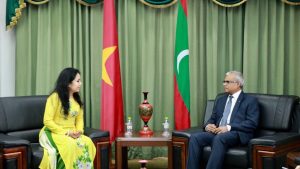 The Non-Resident Ambassador of Socialist Republic of Vietnam to the Maldives, Her Excellency Madam Phan Kieu Thu, paid a farewell call on the Minister of Foreign Affairs, His Excellency Dr. Mohamed Asim this morning.

At the meeting, both Minister Asim and Ambassador discussed on exploring ways to further consolidate the bilateral ties that exist between the two countries.

Foreign Minister highlighted how important Vietnam is to the Maldives for developing bilateral ties. The Minister also stated that there has been a grow in numbers of Maldivians travelling to Vietnam for various purposes, including for trade and commerce.