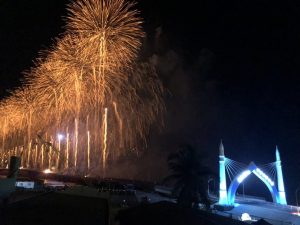 The Sina-Male’ Bridge was ablaze with a world class fireworks display on Thursday night, 30 August 2018.

President Abdulla Yameen Abdul Gayoom along with the Representative of the Chinese Government and the Head of the International Development Cooperation Agency of China, His Excellency Wang Xiaotao inaugurated the bridge.

Speaking at the historic inauguration of the Sina-Malé Bridge, President Abdulla Yameen Abdul Gayoom stated that we are celebrating the dawn of a new era for Maldivians, where we see our future unfolding into an age of progress and tranquillity, and where dreams become reality. 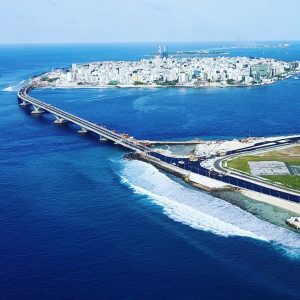 “Thousands of people crossing a kilometre of water everyday several times, kept us hoping, dreaming, and dreaming Big. Yet it was thought to be beyond the economic, political and engineering resources available to the Maldives. It was in a sense, and accepted to be –  a ‘Bridge too Far’” the President noted in his inaugural speech.

Further, President Yameen stated that his resolve was to fit in the most crucial but missing piece of the developmental stratagem of Maldives, and his priorities were to enable the Government to deliver the conveniences of modern day living.

The inauguration of the bridge has equipped the people with the tools to build for themselves better lives and this was yet another bold and great development milestone achieved.

No doubt the Sina-Male’ bridge will improve the living condition and livelihood of many Maldivians leading to increased gross happiness.

The Bridge will be opened for public use on the 7th of September 2018, promising greater opportunity to enhance trade in the country and improving connectivity for the people of the Maldives and millions of visitors.

“IT’S THE DAWN OF A NEW ERA FOR MALDIVIANS” SAYS THE PRESIDENTPRESIDENT YAMEEN TAKES PART IN THE CEREMONY TO MARK THE COMPLETION OF THE SHORE...
Scroll to top