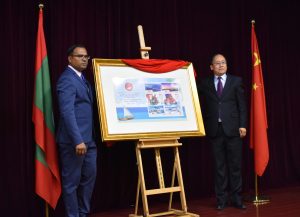 A special event was held today to handover and officially release the special stamps commemorating the 45th anniversary of the establishment of diplomatic relations between Maldives and China. The stamps produced by the Embassy of Maldives in China in collaboration with the Philatelic Association of Ministry of Foreign Affairs were handed over to the embassy by Secretary General of the Association Mr. Ma Xiaoling. Ambassador H. E. Mohamed Faisal received the stamps.

Speaking at the event Ambassador Faisal thanked the Philatelic Association for their strong support and collaboration to produce the special set of stamps. He noted that the special commemorative set comprises six stamps highlighting cooperation and partnership between Maldives and China. The Ambassador said that the partnership has grown in strength over the past 45 years, and particularly over the past four years and that it was a partnership of win-win development that is rooted in mutual trust and respect. Ambassador Faisal further highlighted the strong cooperation in the field of infrastructure development noting the completion of major works of the China-Maldives Friendship Bridge Project and the runway component of the international airport upgrading project.

Ambassador Faisal added that as a partner of the Belt and Road Initiative and a firm believer in the concept of a community of shared destiny, Maldives remained committed to enhancing bilateral, commercial, and cultural ties with China and all those who respect Maldives choice of development path and were committed to seeking win-win cooperation opportunities.

The stamps were designed by Mr. Fang Jun and show infrastructure development, youth and sports and tourism and leisure resources of Maldives and China. A first-day cover was released by China National Philatelic Corporation in December 2018 to commemorate the 45th anniversary of bilateral relations. Maldives and China established bilateral relations on 14 October 1972.