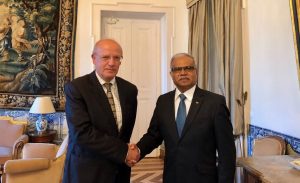 As co-facilitator of the United Nations Oceans Conference held in New York in June 2017, Minister Augusto described oceans, preservation of marine life and climate change as core areas, the Maldives and Portugal can collaborate in the multilateral arena.  Stating that the Portugal organizes Oceans Conferences every year, Minister Augusto mentioned, that as a Small Island Developing State, Maldives can share and gain experiences on how to address adverse effects of climate change, in such Conferences. Minister Asim described Maldives as one of the first countries to ratify Paris Agreement and stressed on the advocacy role Maldives plays as the Chair of Alliance of Small Island States (AOSIS).

Minister Asim stressed on the Maldives’ achievements in the areas of fisheries, tourism and infrastructure. In this regard, both Ministers discussed ways in which Maldives and Portugal can collaborate in fisheries and tourism sectors.

Minister Asim and Minister Augusto both reiterated their commitment to work closely on bilateral issues of mutual interest and to work closely in international forums, as advocates of oceans and climate change.

The Maldives established diplomatic relations with the Portugal on 9 February 1995. This is the first official visit of Minister Asim to the Portugal since he assumed office. He was accompanied by Ms. Samahath Zuhuree, Assistant Director at the Ministry of Foreign Affairs.