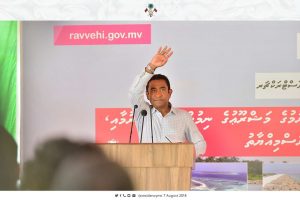 President Abdulla Yameen Abdul Gayoom has stated that economic prosperity should be beneficial to all citizens. The President made this remark while speaking at the function held this morning to mark the completion of the beach protection project, and inauguration of habour in Madaveli Island, South Huvadhu Atoll.
While addressing today’s gathering, the President stated that developmental projects must be reflected on the whole country, especially the least populated areas, as development in these areas cannot be achieved within the revenue capacity of the island. He further stated that every inhabited island is as important as the capital city, in terms of development.
Speaking at the function, President Yameen said he came to power to solve the problems and difficulties faced by the people, especially the challenges being faced in areas like waste management, clean drinking water services, road development and housing. He noted that he was able to resolve many of these problems with the capability of well-equipped State companies.
In his speech, President Yameen also highlighted that this administration has spent MVR 140 Million so far for the development of Madaveli Island, and noted that the amount is estimated to rise to MVR 150 Million by the end of this term.
Noting that Huvadhu Atoll will be a tourism hub in the future, President Yameen announced that within the next 3 years Kaadeddhoo Airport will be developed to international standards. President Yameen also said that his aim is to develop 10,000 beds within the Huvadhu atoll in the next 3 years. The President highlighted that this would in turn facilitate more job opportunities. Moreover, President Yameen said that he aims to establish a ferry transport system especially for Huvadhu Atoll.
Noting that the foreign policy of the country is based on Islamic values, the President underscored that the Maldives has been maintaining a close relationship with Arab Islamic countries. He noted with appreciation that the Saudi government has granted 1000 additional quotas to the Maldives for this year’s Hajj pilgrimage.
The President is currently on a three-day visit to some islands of Huvadhu Atoll.