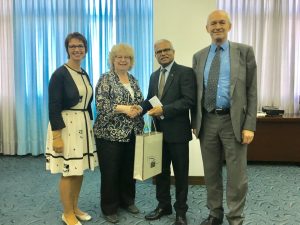 The visiting delegation of the European Parliament calls on the Minister of Foreign Affairs Dr. Mohamed Asim.

In the meeting held at the Ministry of Foreign Affairs, this morning,  discussions were held on important aspects of the EU-Maldives relations, especially in the areas of environment and climate change, counter terrorism and violent extremism, socio-economic development, strengthening governance and democratic framework. An exchange of views was also held on progress of on-going initiatives under the EU-Maldives cooperation, such as the collaboration on Illegal, Unreported and Unregulated Fisheries Policy and the EU Election Observer mission.

During the three-day visit, in addition to meetings with key figures of the Government of the Maldives, the delegation will also visit Addu Atoll to see progress of the Climate Change Adaptation Project (CCAP) in Addu City and Fuvahmulah, which is a project fully funded by EU, administered by the World Bank and implemented by the Ministry of Environment and Energy.