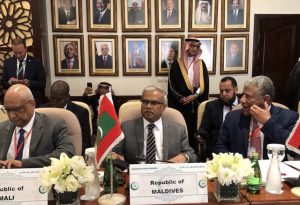 The Minister of Foreign Affairs His Excellency Dr Mohamed Asim addressed the Council of Foreign Ministers of the Organization of the Islamic Cooperation (OIC) at the Extraordinary Meeting held to discuss the situation in Yemen, and in particular the ballistic missiles fired by the Houthi militia towards Riyadh.

Minister Asim condemned the offensive actions of the Houthi militia in launching the ballistic missile attack against Saudi Arabia, and expressed Maldives solidarity with the Kingdom of Saudi Arabia.

Foreign Minister stated that the “blatant disregard exercised by the Houthis in undermining the security and sovereignty of a neighbouring State is a grave provocation, which would add no value to the on-going international efforts to reach a political settlement”.  He also stated that Maldives supports the actions of the UN Security Council, and the work of the Secretary-General’s Special Envoy for Yemen Mr. Ismail Ould Cheikh Ahmed in finding a solution to the conflict.

In concluding his statement, Minister Asim expressed the Maldives desire for peace, lasting stability and prosperity for Yemen, and it’s support for reaching a final and comprehensive agreement to end the conflict.