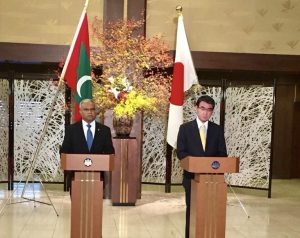 During the meeting, Minister Asim and Minister Kono reviewed the program of cooperation between the two countries and agreed to work together to further strengthen the existing cordial relations between Maldives and Japan. Minister also welcomed investments from Japan in particular to develop Hulhumale’ as a resilient and safe island.

Minister Asim also thanked the Government and the people of Japan for the invaluable support and cooperation extended towards the socio-economic development of the Maldives.

Minister Asim gifted to his counterpart Taro Kono, the first day cover of the commemorative stamp set issued by the Maldives Post on the 50th Anniversary of the establishment of diplomatic relations between Maldives and Japan.

In addition to economic cooperation, both Ministers also discussed regional and global issues of mutual interest including maritime cooperation and ways to further enhance the existing historical ties of friendship.

Minister Asim is visiting Japan on a three-day official visit in connection with the 50th anniversary of the establishment of diplomatic relations between the Maldives and Japan.