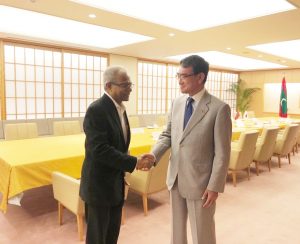 During the meeting, Minister Asim and Minister Kono, discussed areas and avenues of cooperation to enhance the Maldives-Japan bilateral relationship. Both ministers discussed on expanding and advancing bilateral cooperation in a wide range of fields including environment, climate change, disaster prevention, tourism and health care. The importance of the maritime security under the Free and Open Indo-Pacific Strategy was also among the issues discussed during the meeting.

Both ministers also exchanged views on the US-DPRK summit held in Singapore on June 12, and recognized the importance of the swift implementation of the agreements reached in order to realize comprehensive peace, stability and progress in the Korean peninsular. Further, both ministers expressed hope that the Summit would lead to an early resolution of the abductions issue.

Before the meeting both minsters attended a signing ceremony held to Exchange Notes to provide a Grant Assistance of JPY300 million for the Health Sector of Maldives, under the Japanese Economic and Social Development Cooperation Program.