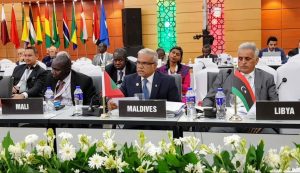 The Minister of Foreign Affairs, His Excellency Dr Mohamed Asim today delivered a statement at the ongoing 45th Session of the Organization of Islamic Cooperation (OIC) Council of Foreign Ministers, which is being held in Dhaka, Bangladesh.

In delivering his remarks, Minister Asim reaffirmed that the Maldives would remain committed to the ideals and values of the OIC and that of the Muslim Ummah. He stated that the OIC must remain united in tackling the global problems faced by Muslim countries, including on Islamophobia, discrimination and in combating violent extremism. He said that partnerships across the various regions represented in the OIC are crucial to tackling the issues faced by the Islamic world.

Minister Asim also reiterated the historic position of the Maldives in supporting an independent and sovereign State of Palestine, and upheld the Maldives strong objections to the unilateral recognition of Al-Quds Al-Sharif as the Capital of Israel.

Minister Asim urged Member States of the OIC to work with the various parties to find a lasting and sustainable solution to the Rohingya crisis in Myanmar, and thanked the Bangladesh Government for organizing a field visit to the Rohingya refugee camps in Cox’s Bazaar for attending delegates.

Lastly, the Minister Asim spoke of the need for smaller countries to be represented in the decision-making bodies of the United Nations, based on equitable geographic distribution and outlined the basis for the Maldives candidature for a non-permanent seat on the United Nations Security Council for the term 2019-2020.

The Organization of Islamic Cooperation (OIC) is an international body comprising of 57 countries with large Muslim populations. The Council of Foreign Ministers is an annual gathering of the foreign ministers of Member States to deliberate on issues of concern to the Islamic world. The Maldives became a member of the OIC in 1976.