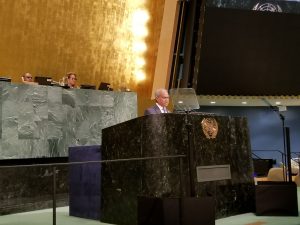 Minister Asim called on the international community to end the grave human rights violations and injustices taking place in Myanmar, Palestine and Syria. The Minister made these remarks at the General Debate of the 72nd Session of the United Nations General Assembly.

Speaking on the situation of Rohingya Muslims in Myamar, Minister Asim stated that systemic violence, including massacres, forced displacement and ethnic cleansing of Rohingya Muslims are alarming. The Minister further stressed that those responsible for these barbaric actions must be brought to justice swiftly and the acts of prejudice, violence, and that discrimination against Rohingya Muslims must end.

The Minister reiterated the Maldives call for an independent, sovereign State of Palestine with East Jerusalem as its capital, established along the 1967 borders, and called to end the violations taking place in the Palestine territories.  Minister also called to end the war crimes, inhuman treatment and suffering in Syria.

“Instilling fear of “the other” is easy.  Determining “them” as worth less – due to their religion, race, ethnicity, nationality, Islamaphobia, or whatever the reason – is a short step away. When this happens, it is easy to ignore grave violations, easier to even encourage them. It is then, and only then, we see – and we have seen – the worst of humanity”, noted the Minister.