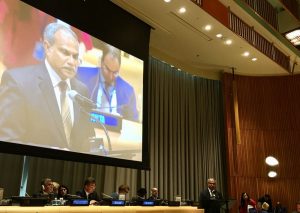 Minister Asim participated in the High-level plenary meeting convened by the President of the General Assembly to commemorate and promote the International Day for the Total Elimination of Nuclear Weapons, this morning.

Minister Asim also condemned the recent tests of ballistic missiles by the Democratic People’s Republic of Korea and stated that they were clear violations of international law and an unnecessary act of provocation. Minister Asim, hence urged the DPRK to return to dialogue and to engage constructively in the multilateral platform.

Further, Minister applauded the monumental adoption, on 7 July 2017, of the Treaty on the Prohibition of Nuclear Weapons following the United Nations Conference to Negotiate Legally-Binding Instrument to Prohibit Nuclear Weapons, leading to their total elimination. The Treaty according to the Minister, is the most important pledge that the international community has made in the relentless pursuit of a nuclear-free world.

The Maldives has ratified the Treaty on the Non-Proliferation of Nuclear Weapons and is a Party to the Comprehensive Nuclear-Test-Ban Treaty. The Maldives also strongly advocates for the establishment of the Indian Ocean as a Zone of Peace, in line with the Resolution 2832 adopted by the General Assembly in 1971.

The Maldives co-hosted a high-level side-event at the sidelines of the 72nd...Foreign Minister meets the United Nations Secretary General
Scroll to top