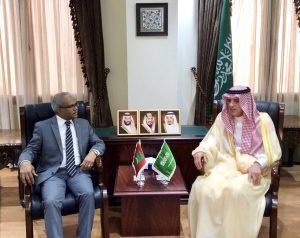 In his remarks, the Minister of Foreign Affairs of Saudi Arabia expressed his sincere appreciation to the Maldives for the support it continues to extend to the Kingdom. He reiterated the close and brotherly relations between the two countries, and the desire of the Government to maintain and strengthen the close engagements between both the countries.

His Excellency Mr. Abdulla Hameed, Ambassador of the Maldives to the Kingdom of Saudi Arabia and Mr. Javed Faizal, Additional Secretary at the Ministry of Foreign Affairs of the Maldives were also present at the meeting.