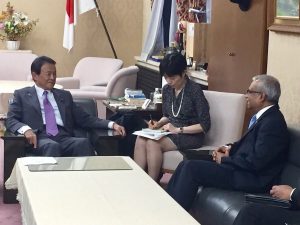 His Excellency Dr. Mohamed Asim has arrived in Male’, after his first bilateral official visit to Japan. Minister Asim was visiting Japan on a three-day official visit in connection with the 50th anniversary of the establishment of diplomatic relations between the Maldives and Japan.

During the visit Minister Asim held discussions with his counterpart, His Excellency Mr. Taro Kono, Minister of Foreign Affairs of Japan, and reviewed the programme of cooperation between the two countries and agreed to work together to further strengthen the existing cordial relations between Maldives and Japan. Minister Asim paid a courtesy call on the Deputy Prime Minister and Minister of Finance of Japan, His Excellency Mr. Taro Aso, President of the Japanese International Cooperation Agency (JICA), Mr. Shinichi Kitaoka, and the President of Japan-Maldives Parliamentarian Friendship League, Honorable Mr. Wataru Takeshita. Minister Asim also met with the  Parliamentary Vice-Minister for Foreign Affairs of Japan His Excellency Mr. Iwao Horii. 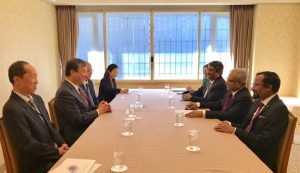 Foreign Minister also participated in a press conference organized by the Japan National Press Club (JNPC), and addressed the Japanese local media on his visit and the 50th anniversary of the establishment of diplomatic relations between the Maldives and Japan. Minister’s speech was followed by a lively Q&A session with the local media covering bilateral, regional and international issues. In addition, Minister Asim gave an interview to Asahi Shimbun, one of the most respected newspapers in Japan. In his interview, Minister touched on a wide range of issues including development cooperation, tourism promotion, and counter-terrorism as well as regional and international issues.

Minister of Foreign Affairs, His Excellency Dr. Mohamed Asim met with the resident Maldivian Community in Japan, jointly with the members from Japan Overseas Cooperation Volunteers (JOCV), at a reception hosted by the Embassy of Maldives to celebrate the 50th anniversary of the establishment of diplomatic relations between the Maldives and Japan.