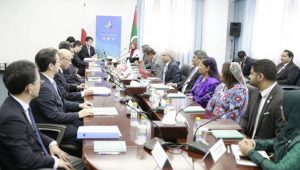 In addition, both Ministers also discussed regional and global issues of mutual interest, including climate change, terrorism and the situation in the Korean Peninsula.

Minister Kono is visiting the Maldives as the two countries are celebrating the fiftieth anniversary of the establishment of diplomatic relations.

This is the first official visit undertaken by a Japanese Foreign Minister to the Maldives.