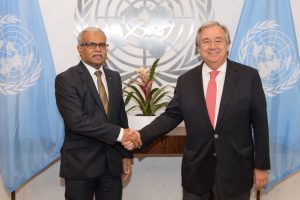 Minister of Foreign Affairs, Dr. Mohamed Asim met with the United Nations Secretary General, Mr. António Guterres this afternoon. He was joined by the Minister of Environment and Energy, Mr. Thoriq Ibrahim.

Mr. Guterres applauded the leadership of the Maldives on climate action, oceans issues and on the sustainable development of Small Island Developing States (SIDS). The Secretary General stated that the Maldives is on the first line of impact and first line of advocacy on Climate Change.

The Meeting was held on the sidelines of the Seventy Second session of the United Nations General Assembly.

Foreign Minister calls on the International Community to ban Nuclear Weapon...Minister of Environment and Energy met with the Deputy Secretary General of...
Scroll to top