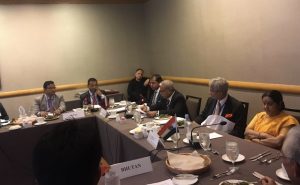 An informal meeting of SAARC Council of Ministers was held today in New York, at the sidelines of the Seventy Second Session of the United Nations General Assembly.

The meeting was convened His Excellency Krishna Bahadur Mahara, the Deputy Prime Minister and the Minister of Foreign Affairs of Nepal, as the current Chair.

The Minister of Foreign Affairs of Maldives, Dr. Mohamed Asim attended the meeting along with Foreign Ministers of all SAARC countries. During the meeting, the Secretary General of SAARC Mr. Amjad Hussain Sial briefed Ministers on the progress of activities since the last meeting. Ministers engaged on ongoing activities of SAARC and issues of regional importance.

Since 1997, the Council has been meeting informally on the sidelines of the United Nations General Assembly Sessions in New York.

Message by Minister Asim on the occasion of the fifty-second anniversary of...Foreign Minister meets his counterparts from Bahrain and Burundi
Scroll to top