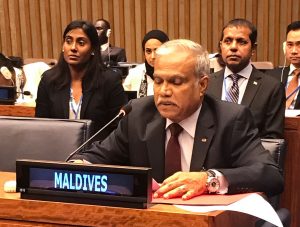 During Minister Asim’s Speech, he expressed gratitude for the solidarity offered by the G77, for small states like the Maldives. ‘…together, the group has made significant strides throughout the negotiation for the Paris Agreement, the 2030 Agenda for Sustainable development, Addis Ababa Action Agenda and Sendai Framework on Disaster Risk Reduction’ he said.

While appreciating the Group’s diversity, Minister Asim also condemned the atrocities taking place in the Northern Rakhine State in Myanmar and called on the Government of Myanmar to bring an end to the atrocities. ‘Together we raise the voice of the voiceless and the marginalized. Every day we distract ourselves from the big picture by looking inwards, is truly a day lost in vain’ he said.

The Group of 77 was established on 15 June 1964, by seventy-seven developing countries, to promote the collective economic interests of its members.

Tweet
September 22, 2017/by Maldives Embassy
https://www.maldiveshighcom.in/wp-content/uploads/2021/02/Logo-High-Commission-of-the-Republic-of-Maldives.png 0 0 Maldives Embassy https://www.maldiveshighcom.in/wp-content/uploads/2021/02/Logo-High-Commission-of-the-Republic-of-Maldives.png Maldives Embassy2017-09-22 13:19:122017-11-03 13:19:31Foreign Minister speaks at the Annual Meeting of the Ministers of Foreign Affairs of the Group of 77 and China