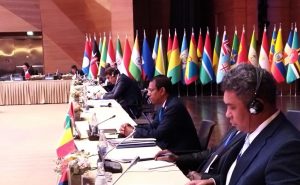 Foreign Secretary Ahmed Sareer has highlighted Maldives’ belief in multilateralism as the motivation to join the United Nations and the Movement of the Non-Aligned Countries (NAM). Addressing the Mid-term Ministerial Meeting of the NAM in Baku, Azerbaijan, he noted Maldives is guided by the belief that “every country, regardless of size, regardless of might, regardless of where they came from, will be treated equally, with equal opportunity, as equals before international law.”

In his statement, the Foreign Secretary said that no dispute or disagreement was beyond dialogue or rapprochement, and noted that the Maldives would always embrace constructive engagement with all its partners which should be based on mutual respect and understanding.

Noting that countries like the Maldives is under-represented in decision-making bodies of the international organizations, Mr Sareer stated as the reason for Maldives having presented its candidature to UN Security Council for the term 2019- 2020. Through its membership of the Security Council, the Maldives wished to amplify the interest of the least represented, in line with the broader objective of attaining peace and security in the world, he said.

He ended his address by reiterating Maldives firm belief in NAM’s role in remaining steadfast in the pursuit of the world that respects the rule of law, sovereignty and territorial integrity, equality and justice.

The Maldives became a member of the NAM on 15 August 1976 and has since then, participated and contributed to the work of the Movement. NAM was established in 1956 and counts 120 countries amongst its membership.

Maldives selected as No.c1 Dream Destination among Japanese at Marine Diving...FTA with China not to be seen as countering India’s interests – Ahmed...
Scroll to top