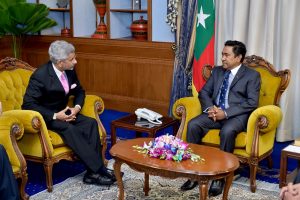 The Foreign Secretary of the Ministry of External Affairs of India, H.E. Dr. S. Jaishankar, paid a courtesy call on President Abdulla Yameen Abdul Gayoom, this morning, at the President’s Office.

During the call, the President expressed sincere appreciation for the continued support and assistance provided by the Government of India. President also expressed his firm commitment to further elevate existing relations through different avenues of cooperation. In this regard, the President noted that commercial relations between the two countries would further enhance the greater economic cooperation and development. Additionally, the President expressed confidence in the Foreign Secretary’s visit to the Maldives, which would expedite the implementation of the different areas of cooperation between Maldives and India.

The Foreign Secretary was accompanied at the call by the Ambassador of India, H.E. Akhilesh Mishra and Joint Secretaries of the Ministry of External Affairs of India, Mr. Sanjay Panda and Mr. M. Subbarayuda.