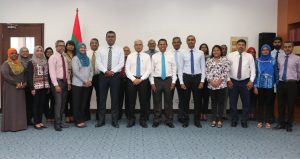 Foreign Service Institute of Maldives (FOSIM) held a briefing session for the newly nominated diplomats to be posted at Maldives Missions abroad.

During the 6th briefing session of FOSIM held today at the Ministry of Foreign Affairs, the nominated Ambassadors were briefed on foreign policy, bilateral/multilateral relations, functions and responsibilities of an Ambassador and on the issues related to diplomatic communication, protocol, consular, administration and budget.

FTA with China not to be seen as countering India’s interests – Ahmed...President sends message of condolence to the Prime Minister of India
Scroll to top