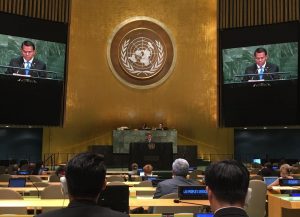 The Foreign Secretary of the Maldives, Mr. Ahmed Sareer, participated in the High Level Plenary meeting to review the Global Plan of Action to combat trafficking in persons this afternoon.

Speaking at the High Level meeting, the Foreign Secretary stated that trafficking in persons is an inhumane, criminal activity, which tears apart families, and fuels violence. He termed it as a transnational organized crime, which targets the most vulnerable.

The Foreign Secretary also briefed on the work carried out at national level in preventing trafficking in persons, in line with the Global Action Plan. He stated that the Maldives acceded the “Protocol to Prevent, Suppress and Punish Trafficking in Persons, especially Women and Children” last year in an effort to reinforce the implementation of existing instruments against trafficking in persons. He further noted that the Anti-Trafficking Act of the Maldives enacted in 2013, saw the establishment of an Oversight Committee to effectively steer policy and implement the legislation. In a further effort to address the issue comprehensively, the first National Action Plan to prevent trafficking in persons has been formulated for the period 2015-2019. The Plan according to the Foreign Secretary, underscores the necessity to strengthen partnerships with the international community to combat this crime.

The Ambassador of Turkey Presents his Credentials to the President and meets...Message by Minister of Foreign Affairs on the International Day of Non-Violence...
Scroll to top