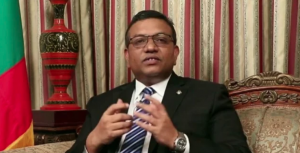 It was on this day in 2017  that the Government of Maldives national promotional campaign Tharika (heritage) was inaugurated. Tharika promotes unity and culture and boosts religious faith and national spirit.

The theme for Tharika is, ‘Religion and nationalism – pivot of Maldivians’.

On the occasion of National Patriotism Day today, Ambassador Ahmed Mohammed said that “Maldives gained composite sovereignity and full independence possessing all rights to have direct relations politically and otherwise with all countries and international organisations. We owe to our past, present & future generations to maintain this status”.

President appoints member to the Elections CommissionWinning a seat at the UNSC would upscale the country’s standard: Ali ...
Scroll to top