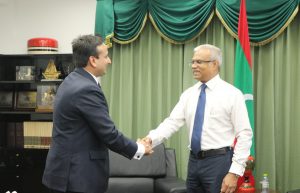 During the meeting held at the Ministry this morning, Minister Asim expressed his gratitude for the services extended to the Government and the people of Maldives by the Honorary Consul and wished him success in future endeavours. In particular, Minister Asim also expressed appreciation for the kind assistance extended by Mr. Chaudhary to the Maldivians in Nepal during the devastating earthquake of 25 April 2015.

Mr. Chaudhary noted his pleasure having served the Government and people of Maldives contributing to the strengthening of relations between the Maldives and Nepal.

Following the meeting, a special ceremony was held at the Ministry this morning, to present a token of appreciation to Mr. Nirvana Chaudhary, for his kind assistance rendered to the Maldivians during his tenure, in particular during the Earthquake in 2015 and the crash of US-Bangla flight recently in Nepal.

President requests for a chance to fulfill the needs of the peopleAmbassador H.E. Ahmed Mohamed called on Ambassador of Lebanon, H.E. Rabie N...
Scroll to top