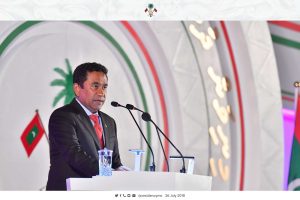 His Excellency President Abdulla Yameen Abdul Gayoom has stated that he has achieved what his citizens had always asked for during the course of his term by listening to the views of all Maldivians, in his address to the nation on the occasion of our 53rd Independence Day.
President Yameen has pronounced that a new era has been brought about to the Maldives through the ongoing major developmental projects throughout the country, and the efforts to enhance the living standard of our citizens. He highlighted the developmental achievements from Bodu Thiladhunmathi to Addu Atoll, proudly noting that there remains no citizen who has not experienced the benefits of the collective efforts towards greater development.
He has also remarked that despite his best efforts, providing adequate and affordable housing to all Maldivian citizens is a task that he is yet to fulfil. He noted that work is under way to complete this task with the ongoing housing project in Hulhumale’ to provide adequate housing to over 100,000 citizens, with over 17,000 housing units.

THE PRESIDENT INVITES YOUTH OF THE COUNTRY TO PARTICIPATE IN THE DEVELOPMENTAL... “THE MALDIVES FORAY INTO THE WIDER INTERNATIONAL AND GLOBALIZED REALM COMPELS...
Scroll to top