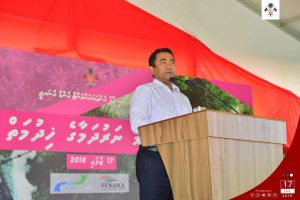 President Abdulla Yameen Abdul Gayoom has reiterated that his aim in competing in the next Presidential elections is to bring development to our country, carryforward good Maldivian principles and to sustain Islamic faith in the Maldives. He made this remark while speaking at the function held to inaugurate the services of sewerage system in Nolhivaram Island of South Thiladhummathi Atoll, as part of his current visit to some islands in the North and South Thiladhummathi Atolls.

Addressing the public, the President highlighted that Maldivians will be able to maintain peace and harmony only by staying true to the principles we believe in, and emphasized that no foreigner will prioritise our wellbeing more than us. In this regards President Yameen urged the public not to let any foreign parties to intrude in the domestic affairs of the Maldives.

Shedding light on the developmental projects carried out in the country, President Yameen stated that in the attempt to expand the tourism sector in the country, this administration plans on adding 3000 beds in North and South Thiladhummathi Atolls alone, during the next term of Presidency.

Tweet
July 17, 2018/by Maldives Embassy
https://www.maldiveshighcom.in/wp-content/uploads/2021/02/Logo-High-Commission-of-the-Republic-of-Maldives.png 0 0 Maldives Embassy https://www.maldiveshighcom.in/wp-content/uploads/2021/02/Logo-High-Commission-of-the-Republic-of-Maldives.png Maldives Embassy2018-07-17 14:49:012018-07-17 14:49:01I WANT TO BRING DEVELOPMENT TO THE COUNTRY WHILE MAINTAINING OUR PRINCIPLES AND UPHOLDING OUR ISLAMIC FAITH – PRESIDENT YAMEEN