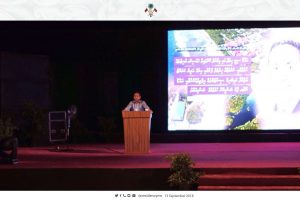 President Abdulla Yameen Abdul Gayoom has stated that the administration’s efforts were put towards transforming all the densely populated areas into cities and to develop the essential infrastructure and facilitate necessary amenities for the required transformational developments. The President made this remark while speaking at the ceremony held this evening to mark the completion of four projects in Hithadhoo of Addu City.

Emphasizing the future educational policy of this administration, President Yameen stated that he would include information and communication technology as a mandatory subject in the school curriculum, under the all-inclusive educational policy of the current administration. He further reiterated the decision to double the number of scholarships facilitated by the government, in the coming years. He also underscored that facilitating the youth with more employment opportunities was one of his main priorities.

As part of his current tour of Addu City and Fuvammulah City, the President will also visit Feydhoo Island and inaugurate the water services of Feydhoo, Maradhoo, and Maradhoo-Feydhoo, and mark the completion of land reclamation project in Feydhoo Island.

Moreover, the President is scheduled to visit Fuvahmulah City to initiate sewerage services, water services, inaugurate housing units, nature park and to mark the completion of harbor revetment project.
President Yameen will also visit Maradhoo and Maradhoo-Feydhoo as part of this tour.

PRESIDENT YAMEEN PARTICIPATES IN THE CEREMONY TO MARK THE COMPLETION OF FOUR...PRESIDENT YAMEEN INAUGURATES THE WATER SERVICES OF FEYDHOO, MARADHOO AND MARADHOO-FEYDHOO...
Scroll to top