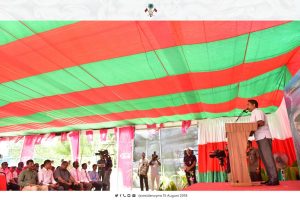 President Abdulla Yameen Abdul Gayoom has today stated that he would be the one to fulfill the needs and realize the visions of the Maldivian people. The President made this remark while speaking in Madifushi Island of Kolhumadulu Atoll, at the ceremony held to mark the completion of the land reclamation and shore protection project, and initiate the sewerage service system.

Speaking at the ceremony, the President stated that the accusations made by the opposition, stating that this administration has only fulfilled half of the electoral manifesto, were baseless, and shed light on some of the transformational mega projects successfully completed during this term of presidency.

Continuing on, President Yameen stated that the test flights at Maafaru Airport was a small example of how far he has taken the country in terms of development – the airport project which was completed within 1 year of this presidential term, was initially commenced 12 years ago, where three administrations failed to deliver.

Speaking in this regard, President Yameen stated that this administration has opened 30 new resorts till date. Furthermore, he stated that 21 resorts will be opened by the end of December this year, and that 75% of the developmental work of these resorts were already complete.

Prior to visiting Madifushi Island, President Yameen initiated the services of sewerage system in Dhiyamigili Island this morning.

PRESIDENT YAMEEN PARTICIPATES IN THE CEREMONY TO MARK THE COMPLETION OF THREE...PRESIDENT APPOINTS SENIOR POLICY EXECUTIVE TO MINISTRY OF HOME AFFAIRS
Scroll to top