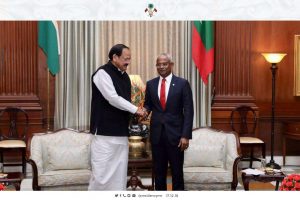 Discussions were held on the close and friendly relationship shared between the Maldives and India, which is based majorly on historical and cultural bonds. President Solih and the Indian Vice President also spoke on matters of mutual interest.

The Vice President of India further assured President Solih of India’s continuous support to Maldives’ development efforts in all areas.

Joint Statement on the occasion of the State Visit of the President of the Republic...MALDIVIAN PRESIDENT AND INDIAN PRESIDENT REFLECT ON CLOSE TIES AND SPECIAL FRIENDSHIP...
Scroll to top