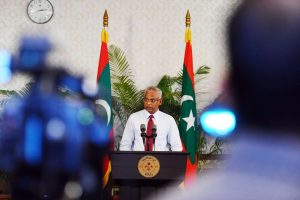 President Ibrahim Mohamed Solih has stated that the slowly fading Indo-Maldives relations have been revitalized and further solidified following the State Visit made to India, on invitation of Indian Prime Minister Narendra Modi. He made this remark while speaking at a Press Conference held at the President’s Office this afternoon to brief the local media on the highlights of the State Visit.

Speaking at the Press Conference, President underscored that during the State Visit, Indian government agreed to provide leniency in facilitating visa arrangements for Maldivian citizens travelling to India for education, tourism and medical purposes. He further stated that this would enable many Maldivians who send their children to school in India, to be able to accompany them and that the agreement would also facilitate easier visa access for Maldivian citizens and their families, who travel to India for medical treatment.

In this regard he provided in-depth specification of the terms of the agreement on Facilitation of Visa Arrangements; stating that Maldivians travelling for tourism, medical and business purposes will get to enjoy a visa free arrangement of 90 days from the six-month visa policy. The President further stated that in case a Maldivian citizen travelling on tourist visa to India develops a medical emergency, arrangements will be made to easily obtain medical visa without travelling back to the Maldives.

Speaking more on the topic, President also highlighted that multiple entry visa for parents of students studying below the age of 18 and for spouses of Maldivians would be facilitated under the agreement.
Moreover, President Solih informed the media on the decision by the Government of India, to provide 1000 additional slots for training and capacity building purposes in diverse fields for Maldivians.

He also shed light on the four Agreements signed between the two countries including cultural cooperation between both countries, establishing mutual cooperation to improve the ecosystem for agribusiness and joint declaration of intent on cooperation in the field of information, and communications technology and electronics.

During the Press Conference President also highlighted that the Maldivian government provided information to the Indian Business community on the scope of available business opportunities in the Maldives.

Moreover, President entertained a question and answer session with the media before concluding the Press Conference.

PRESIDENT SOLIH ARRIVES BACK IN MALDIVES ON CONCLUSION OF STATE VISIT TO IN...Minister of Foreign Affairs departs to Japan on an Official Visit
Scroll to top