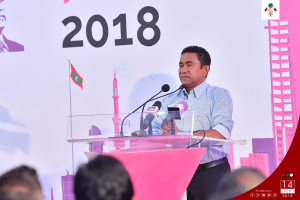 Noting that a President is always accountable to his people, President Abdulla Yameen Abdul Gayoom has underscored that it was his duty as Head of State, to promote compliance by organs of the State, and to promote the rule of law, as per the articles 115 (a) and (c) of the constitution. The President made this statement at a ceremony held by Progressive Party of Maldives this evening.

Defying claims made by some individuals representing the opposition, that the current State of Emergency was illegal, the President stated that it was a constitutional power for the President to declare a state of emergency when the national security was threatened. He further elaborated on the current situation of the country.

The President also noted that the position of the President was the most vulnerable position, as the constitution states exactly how the incumbent could be removed from office.

The President further pointed out that bringing about a coup was a crime, and spoke on the importance of letting a legitimate administration complete its term, for the stability and harmony of the society.

Rule of Law Will Continue to Endure in the Maldives“Maldives open to sending emissary” – Ambassador Ahmed Mohammed...
Scroll to top