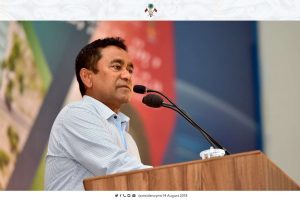 President Abdulla Yameen Abdul Gayoom has stated that each Maldivian has a distinct obligation to transform the situation of our nation and that everyone working in unity would bring about its positive results to the society as a whole. The President made this remark while speaking at the ceremony held this afternoon to mark the completion of road development project in Vilufushi Island of Kolhumadulu Atoll.

Speaking at the ceremony, the President noted that it is high time Maldivians learn how to reap the benefits of new and existing capital resources available in the country. The President noted the importance of being vigilant of those who hinder the development of the country. He also emphasized that those who prioritise development would be determined to bring sustainable progress to the nation.

Continuing on, President Yameen reiterated that his strategy has always been on completing the developmental projects, and ensuring that the people benefit from them. The President also assured the public that he would continue to prioritise the needs of the youth and their empowerment.

Prior to the Vilufushi visit today, President Yameen initiated the services of sewerage system in Buruni Island this morning.

The President will then visit Madifushi Island, and initiate the services of sewerage system, mark the completion of the land reclamation project and the protection of the reclaimed land area in the island.