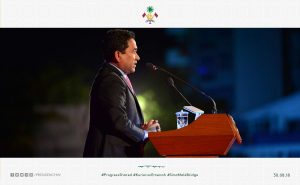 Speaking at the the historic inauguration of the Sina-Malé Bridge connecting Male´, Hulhule´and Hulhumale´, President Abdulla Yameen Abdul Gayoom has stated that tonight we are celebrating the dawn of a new era for Maldivians, where we see our future unfolding into an age of progress and tranquility, and where dreams become reality.

President Yameen noted that the inauguration of the Sina-Malé Bridge fills the hearts of Maldivians with joy and excitement, as Hulhumalé is a landmass of 432 hectares being developed into a modern city to host more than 240,000 people. He also said that Maldivians have been eagerly waiting to cross the “Bridge of Hope”, into the “Lands of Tomorrow”.

Moreover, President Yameen stated that it was his priority to resolve the challenges faced by the thousands of people crossing 1 km of water several times every day. He also noted that the construction of this megastructure has earlier been thought to be beyond the economic and engineering resources available to the Maldives. In this regard, the President stated that his determination was to fit-in the most crucial but missing piece of development strategy for the Maldives.

President Yameen also underscored that his priorities were to enable the government to deliver the conveniences of modern-day living for the Maldivian people, and to equip the people with tools to build better lives.

President Yameen was accompanied at the ceremony by the Representative of the Chinese Government and the Head of the International Development Cooperation Agency of China, His Excellency Wang Xiaotao, the Vice President Abdullah Jihad, First Lady Fathimath Ibrahim, Cabinet Ministers, Parliament Members and senior officials of the government of Maldives and the government of China.