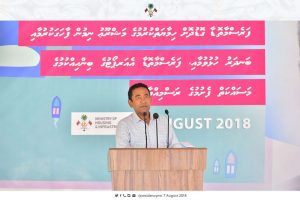 Highlighting the important role played by the youth in the progress of the nation, President Abdulla Yameen Abdul Gayoom has stated that the youth is the force behind the progress it is seeing today. He made this remark while speaking at the function held this afternoon to inaugurate the harbour and airport land reclamation project of Faresmaathodaa, and to mark the completion of the island’s beach protection project.

The President is currently on a three-day visit to some islands of Huvadhu Atoll.

Emphasizing the priority given to youth empowerment by this administration, President Yameen stated that it is the youth that speed up the development projects that contribute to our long term economics goals. The President also reaffirmed that he would continue to facilitate employment opportunities for the youth, in the future.

Further speaking, President Yameen highlighted plans to rise the retirement age to 74 years, from its current 65 years. Moreover, the President spoke on the potential expansion of tourism in the region, noting that the Huvadhu Atoll region would be a tourism hub in the future, with an international airport, higher bed capacity in resorts and seaplane transportation network.

Continuing on, the President noted that in order to ease the transportation within the country, there were plans to establishing an inter-atoll transport system. He also highlighted plans to introduce a priority pass for fishermen, which can be used as a credit or debit card, in acquiring services from State companies.

Prior to his arrival to Faresmaathoda, President Yameen visited Madaveli Island and inaugurated the island’s harbour and attended the ceremony to mark the completion of the beach protection project.

PRESIDENT YAMEEN INAUGURATES THE HARBOR OF FARESMAATHODAA AND AIRPORT LAND RECLAMATION...PRESIDENT YAMEEN PARTICIPATES IN THE CEREMONY TO MARK THE COMPLETION OF FOUR...
Scroll to top