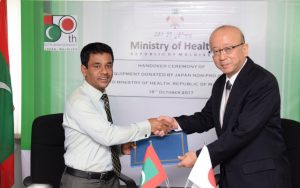 The Government of Japan donated medical equipments worth 103 million Japanese Yen which is equivalent to approximately 14 million Maldivian Rufiyaa, to the Government of Maldives today.

The medical equipment would be utilized in regional hospitals and in selected health facilities of the Maldives.

The aid was presented to His Excellency Mr. Abdulla Nazim, Minister of Health by His Excellency Mr. Kazumi Endo, Ambassador of Japan to the Maldives at a handing over ceremony held at the Ministry of Health this morning. The medical equipment is donated under Japanese Non-Project Grant Aid.

This year we marks the fiftieth anniversary since the establishment of diplomatic ties between the Maldives and Japan. Japan has been one of the biggest bilateral development partners of the Maldives.

President meets with the Vice President and Prime Minister of UAE and the Ruler...Foreign Minister meets his counterpart from Portugal
Scroll to top