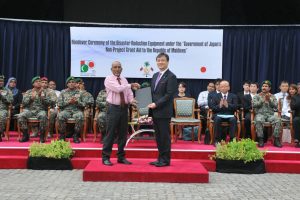 In a ceremony attended by dignitaries from both countries, the equipment was presented to H.E. Mr. Mohamed Zuhair, Minister of State for Defense and National Security, by H.E. Mr. Iwao Horii, Parliamentary Vice-Minister for Foreign Affairs of the Government of Japan.

This year marks the 50th Anniversary of the establishment of diplomatic relations between the two countries. Japan has been one of the biggest bilateral development partners of the Maldives. The Government and the people of Japan have contributed immensely to the socio-economic development of Maldives during the past five decades and continue to provide assistance that has now virtually reached all corners of the Maldivian archipelago.