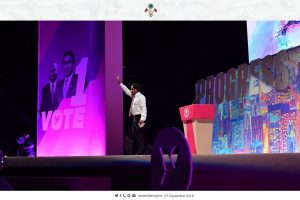 The President Abdulla Yameen Abdul Gayoom, has stated that threats to impose measures on Government Officials and individuals, by foreign nations is an act to influence the upcoming Presidential Elections and an infringement of his electoral rights. The President said this while addressing his supporters last night.

He further stated that he remains concerned but that the external views were not based on the realities on the ground. He went on to state that similar views were held when President Nasheed resigned in Feb 2012, and many statements were made against the Maldives as well. But after inquiry into the events of February 2012, the international community had accepted the validity of the transfer of power in 2012.
Noting that he views these acts as unfair to the people of Maldives, the President urged the international community, to let the Maldivians decide their leader through the ballot box, thereby providing legitimacy of their leadership, without having to worry about measures from external partners.

The President urged the people of the Maldives not to be dismayed by such threats from foreign nations. Further he stated that the Nation has earned the right to stand its ground among the international political arena and affirmed that the Maldives does not want to lose sight of such rights and that the basic tenet of the United Nations was the right of self-determination.

Tweet
September 7, 2018/by Niharika Sharma
https://www.maldiveshighcom.in/wp-content/uploads/2021/02/Logo-High-Commission-of-the-Republic-of-Maldives.png 0 0 Niharika Sharma https://www.maldiveshighcom.in/wp-content/uploads/2021/02/Logo-High-Commission-of-the-Republic-of-Maldives.png Niharika Sharma2018-09-07 18:34:432018-09-10 12:35:50“LET THE MALDIVIANS DECIDE THEIR LEADER THROUGH THE BALLOT BOX, PROVIDING LEGITIMACY TO THE LEADERSHIP, WITHOUT HAVING TO WORRY ABOUT FOREIGN PRESSURE” – PRESIDENT YAMEEN