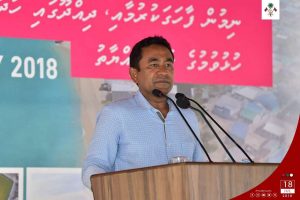 President Abdulla Yameen Abdul Gayoom has stated that loyalty towards the country is the root of patriotism, and that those who were loyal will never humiliate the country. He made this remark while speaking at the function held to inaugurate Dhiddhoo Island’s clean drinking water services, mark the completion of the island’s beach protection project, the completion of the road development project and inaugurate the housing project at Dhiddoo Island.

In this regard, President Yameen reiterated his call for everyone to come together united in defence of the country’s honour and sovereignty. He appealed to everyone to put aside their differences and avoid putting forth one’s own agenda above the nation’s interest.

Addressing the public, the President stated that this administration always upholds the law and reassured that all its actions will be taken in accordance with the country’s constitution. Continuing on, President Yameen noted that no one would dispute about punishing those who break the law.

WE HAVE SECURED INVESTORS’ TRUST AS A RESULT OF OUR ECONOMIC POLICIES –...MALDIVIAN ECONOMY IS BOOSTING BECAUSE OF STRONG POLICIES – PRESIDENT YAME...
Scroll to top