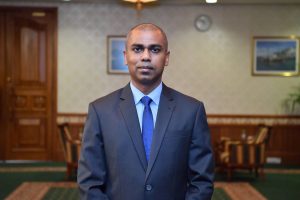 Ambassador Ibrahim Uvais was accompanied at the ceremony by Mr. Adam Hamid, First Secretary and Mr. Mohamed Thahseen, Second Secretary at the Maldives’ Embassy in Japan.

President Abdulla Yameen Abdul Gayoom was the first Maldivian Head of State and Government to undertake an Official Visit to Tokyo on the invitation of the Japanese Prime Minister Mr. Shinzo Abe. During the visit from 14 to 17 April 2014, President Yameen had met with Emperor Akihito, Prime Minister Shinzo Abe and senior officials of the Japanese Government and the National Diet or Parliament.

The Embassy of Japan accredited to Maldives was opened in Male on 1 January 2016. Last year, marked the 50th anniversary of diplomatic relations between the two countries and it was commemorated with bilateral exchanges between the two countries including three meetings of the foreign ministers, the most recent of which was a visit to Tokyo by the Minister for Foreign Affairs, Dr. Mohamed Asim from June 13 to 15, 2018.