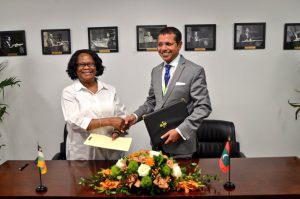 The Republic of Maldives and the Central African Republic have formally established diplomatic relations on 24 May 2018.

The Central African Republic is one of the largest countries in central Africa. It has a population of approximately 4.6 million. The two countries collaborate in the international arena, within the framework of the United Nations, and other international organisations, even prior to the establishment of diplomatic relations.