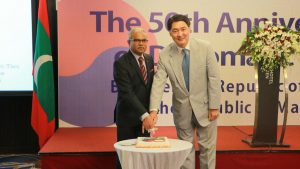 The Republic Of Korea Ambassador to the Maldives Mr. Chang Won-sam hosted a reception to commemorate 5o years of diplomatic relations between the two countries. Minister of Foreign Affairs, Dr. Mohamed Asim who was present at the reception as the chief guest, spoke about how the relationship between the two countries have grown over the last five decades, especially in the last couple of years due to various bilateral developments.

Speaking on the occasion, Minister Asim also admired how the Republic Of Korea has progressed as a nation both socially and economically.

The Republic Of Korea has been contributing to the Maldives through various technical cooperation programs in areas such as fisheries and infrastructure, which constitutes a pivotal role in the Maldives economy.

The Korean Embassy also organized a cultural performance right after the reception at Alimas Carnival. The performance opened to the public will cover “Taekwondo demonstration” by Kukkiwon of Korea and “Boduberu performance” by “1438 Boduberu” group.

The Parliamentary Vice-Minister for Foreign Affairs of Japan calls on the P...Minister Asim co-chairs Joint Meeting Mechanism with Ambassador of China
Scroll to top