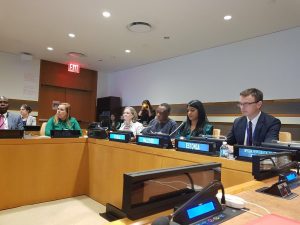 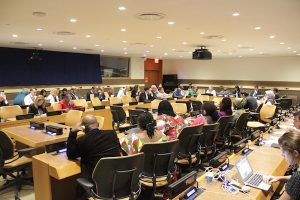 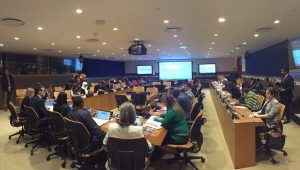 The Maldives co-hosted a Side-Event on “Ending Violence against Children” with Estonia and Nigeria this afternoon. The Side-event was moderated by the Minister of Gender and Family of the Maldives, Ms. Zenysha Shaheed Zaki.

Minister Zenysha also delivered a keynote speech at the event, reflecting on the work of the government of Maldives in ending violence against Children.

While speaking at the Side-Event, Minister Zenysha, acknowledged challenges in addressing  violence against children, and shared the Maldives experience in addressing the issue. The Minister stated that the government takes cases involving violence against children very seriously, and uses multiple strategies in responding and facilitating protection. The Minister noted that especially under the leadership of President Abdulla Yameen Abdul Gayoom, a number of legislative measures and policy initiatives have been undertaken to strengthen the child protection system and added that the government is in the process of updating the child rights legislation to ensure its readiness to tackle modern challenges and emerging issues.

Minister Zenysha also shared initiatives undertaken to reach the widely dispersed population of the Maldives though community social groups established at the Island level to strengthen response mechanisms. The Minister further highlighted on the Maldives’s first ever National Conference on Violence against Children, in which a two-year National Action Plan was endorsed by stakeholders and added that a Child Participation Forum was also convened, to seek the voice of children, on the initiatives in the National Action Plan.

The Minister of Foreign Affairs of Estonia, His Excellency Mr. Sven Mikser and the Minister of Defense of Nigeria Brig.Gen. (ret) Mansur Dan Ali were also among the high level panellists who spoke at the event which was held in partnership with the Office of the Special Representative of the Secretary-General on Violence Against Children, and the Global Partnership to End Violence Against Children.

Foreign Minister meets with the Minister of Foreign Affairs of Dominican Re...
Scroll to top